Evaluating your dairy kids for their good qualities


Here is a checklist of things to look at when evaluating which dairy kids to keep and breed, and which kids to get rid of. This works for adult goats too. I pulled this off of the “Caprine Conformation Clinic” group on Facebook. 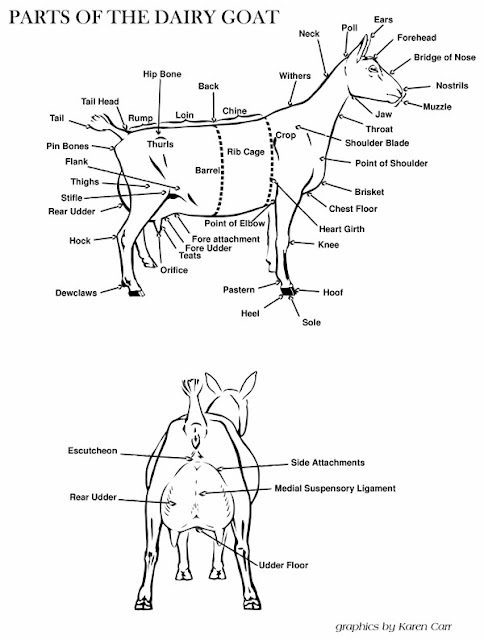 FIRST- depth in the heart girth- when viewed straight on from the side the chest floor should be below the elbows, the deeper the better. Related to this- you should see chest/brisket in front of the point of shoulder & front of the front legs. The elbows should be snug to the barrel.

THIRD- Width in the head- who has the wider muzzle from the front and deeper jaw from the side?

FOURTH- Cannon bone- Look at them straight on from the side, standing normally. Draw an imaginary line parallel to the ground from the knees towards the back of the goat- are the hocks higher than that line? Then the doe is short in the cannon bone. Level is good, sometimes you will have a little more length in the cannon than the hock. A doe that is level from knees to hocks may have short cannon bones- but in that case she isn't short in the cannon bone, she is just short! If the doe is shorter in the front, she will likely be high in the rump or low in the front end.

FIFTH- Length/width of rump- Use a ruler if you need to. Measure from the hip to the pins- who has the longer rump? Sink an imaginary plumb line down from the point of hip to the ground- remember the fore udder will seldom be further forward than this imaginary line. Watch from the rear- whose rump is wider, who walks with more openness into the escutcheon, when they stop naturally, who stands with more width between the hocks?

SIXTH- Legs & topline- watch them walk straight at you from the front- do they track straight? Toes pointed forward? Are the pasterns upright? Are they short and strong looking? When in motion, from the side, does the body look long? Do they level out over the topline and rump in motion, or do they reach far enough under the body with the hind legs that the withers appear to be uphill (that is good)?

SEVENTH- Feel the ribs for bone pattern. The ribs should feel flat, be widely spaced, point towards the rear (flank), and the last rib should be as long as possible. The rear cannon bone, from the rear, should look flat on the sides, not round like a Boer leg.
Posted by ADK Goat Club at 12:07 PM

ADK Goat Club
This is the official blog page for the Adirondack Goat Club. The club is open to all people living in the Tri-Lakes area who have goats or who are interested in having goats.